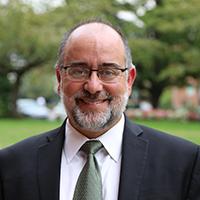 Dennis Galvan is professor of International Studies and Political Science, and Vice Provost for International Affairs at the University of Oregon.

Galvan researches institutional adaptation, nation building, political culture, and the creation of locally meaningful, sustainable models of development in the global south. He has conducted field research in West Africa since 1986, primarily in a cluster of thirty villages in Senegal’s Sine region, and in Central Java, Indonesia since 1999.  Central to all his work is a concern for how ordinary people adaptively transform the nation-state, markets, law, local government, and natural resource management systems to suit their changing and mutable notions of political morality, heritage, and identity